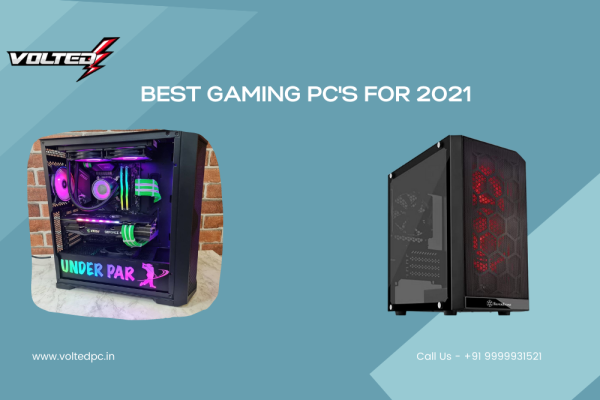 The last year has been, if not by far, one of the most essential times responsible for the boom of Gaming industry. The industry was revolutionized by the emergence of new people enthused by gaming in Covid lock-downs. This also threw a spotlight on the custom built gaming pc  industry to acheive that high FPS and mesmerizing graphics to enhance the gaming experience. Still confused on what to buy or what components to go for ? Look no further because here we are to provide you with what should you look for in a gaming pc, to the best of our knowledge.

The question of the decade is, can you have a gaming PC built without hurting your wallet ? The answer to this question is yes if you're not a fan of high resolution gaming. If you're a high resolution fanatic and want 360 fps on high demanding game on a 1440p monitor then you'll want to look in the sections down below. But be informed, you're going to have to spend some extra paper. [[Custom Gaming PC for 2021#The High Res Gaming Solution]].

Here's a brother to brother advice, or brother to sister....you get what I'm trying to get at!

In this current market nothing beats the AMD Zen 3 architecture. The Crown has been taken from Intel and been passed down to AMD for featuring a design that at its best promises a 19% boost in IPC (Instructions per second ) performance. That's a lot.

As far as pushing your pixels on a monitor having a 1080p or a 1440p resolution, you'll want to sport a NVIDIA RTX 3060. With an approximately 35% less performance than the RTX 3070, RTX 3060 still is a top notch choice for a gaming enthusiast on when it comes to keeping it within your budget.

Now that we are done with suggesting you with the fiery components, lets look at how hot these popular games perform with this configuration :

All of these games were tested with a combination of high and medium settings for the graphics.

So, you want more than just a "fine" gaming experience. You're in luck because the technology advancements in the previous years and for the forthcoming years will be focusing on

pushing more pixels for the best clarity and sharpness of the image.If you're aiming for 4K or even high performance on a 1440p settings here's the best you can get:

As far as the CPU is concerned, you're probably want to go with a high core count. An 8 core CPU like a Ryzen 7 5800x or a 12 core Ryzen 9 5900x( in case you also need to handle huge workloads) would be a must to process the extra details that are thrown in high resolution settings. It would be helpful to note that if you want to stick with the Intel counterpart an

i9 11th gen or even 10th gen would do it for you, but in a multi-process environment there is absolutely no competition to AMD at this very time. The IPC improvement per core is a huge benefactor for team red.

All these tests were done at an optimal settings to provide the best gaming pc experience and ray tracing was off.

Now that we are clear with this, we also recommend you to go with a RAM of at least 16GB capacity .

If you have a certain configuration in mind and want to build your own configuration or check out more options, have a look at our website, www.voltedpc.in . We are VOLTED PC, a New Delhi based firm, and we specialize in building gaming PC's and workstations.

For more details you can contact us directly through whatsapp or our website and solve all your queries you might have about building your dream gaming PC.
Call us: 9999931521